This month, two events have taken me back in time.  I have been transported back to the preparational period and performance of Zakir Hussain’s riveting Concerto for Tabla and Orchestra.  The piece was commissioned by the National Centre Performing Arts in Mumbai, for the Symphony Orchestra of India’s  tour to Switzerland, in January 2016.    It’s an extraordinary process to think back to the World premiere in Mumbai, September 25th, 2015 which led not only to the European premiere in Zurich’s fabled Tonhalle on January 19th, 2016 with the SOI, but to the London premiere in May, 2016 with the BBC Concert Orchestra.   It was a real privilege to conduct these concerts.   This month – April 21st – saw the US Premiere of Peshkar, with the National Symphony Orchestra in Washington, D.C. with conductor Christian Macelaru – another building block in bringing this work into the repertoire. 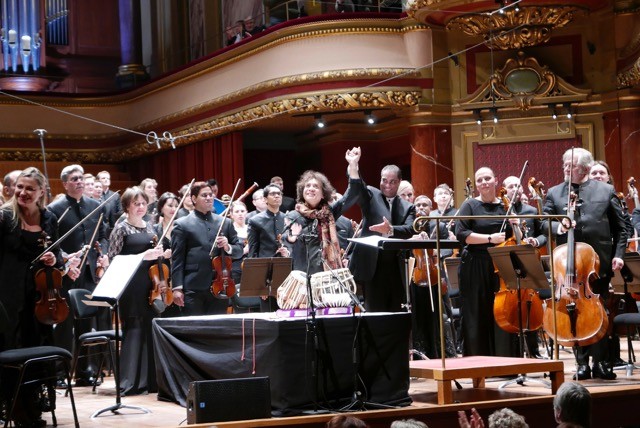 As mentioned earlier, the SOI celebrated its tenth anniversary last year, and to mark this milestone the NCPA engaged the eminent film maker Sumantra Ghosal to create a documentary film.  There are in fact two films,   “The Universal Language” and “An Indian Accent”.   The first chronicles the processes at the Symphony Orchestra of India and its quick ascent into international circles.  The second chronicles the process for PESHKAR, Maestro Hussain’s Tabla Concerto.   The latter was taken up by the Indian Film Festival Los Angeles, (IFFLA) and screened on April 6th to a cinema audience, following which I joined Hussain in a discussion and Q and A moderated by Dr. Venkataraman.

However, quite aside from the music, the IFFLA screening brought certain topical points to the fore, which have always held great importance, but now struck me as worth sharing – and certainly the gravamen of this April blog.  These points brought home the universality of music making, and that the bonds between all people and all nations are more close than they are far apart.   Zakir mentioned how his childhood was an easy, unfettered, encouraged and completely natural exposure to Hinduism, Islam and Christianity – all at the same time.   None of the children growing up with him would see a distinction that demanded blood and war and regression into religious despotism.  Now, more than ever, it seems that those in power have defined their ascendancy by exactly this coercion and division.   So many people in the US and Europe stood for the breaking of unity, voting in large numbers for a xenophobic anti- immigrant policy driven by religious categorizations.   Whether America’s Trump, UK’s Farage cheered on by now Foreign Secretary Johnson, France’s Le Pen, The Netherland’s Wilders, Germany’s Junge, Greece’s Michaloliakos, Sweden’s Akerson, Austria’s Hofer, Hungary’s Vona, and Slovakia’s Kotleba – there is a far right, anti- establishment, radicalized lot of politicians, appealing to people’s baser instincts and supporting their ‘populist’ positions with half-truths – and in some cases – downright lies.   I didn’t think that there would be that many of them, but this list shows politicians who are prepared to put themselves before the people they should serve, and will do and say almost anything to get there.  Boris Johnson’s and Nigel Farage’s promise that 325 million British pounds sterling a week would be diverted from the EU – into Britain’s National Health Service if only people would vote for Brexit – was a flagrant and irresponsible lie long before it was proved to be one.   Bringing back the industrial and coal mining jobs of the 1970’s to the American rust belt in this era of climate change was another preposterous lie.   In these coming elections in France, it will be worth scrutinizing Le Pen’s platform and whether or not her surprise move –  to disassociate her toxic name with the party she will almost certainly control – is a political dodge.   It is so easy to rabble rouse.  So much more difficult to formulate a lasting policy that is inclusive and thinks beyond the here and now to tomorrow’s republics.    Those that won their elections are finding governance a lot more difficult than the fun of raucous criticism from the fringes.   Yes, healthcare is complicated – and almost everyone in and out of government knew it.

Vona and Kotleba astound me, since they have only just crawled out of the fascist, dictatorial past that their position espouses setting up the people of Hungary and Slovakia for a grim future.  Individually, of course they will suck away power and money – and no laws will stop them, because they will have dismantled the system that prevents them.   Pitting one group against another is an easy politician’s trick.   It wins votes for the election, and then the day after the election steadily destroys democratic ideals in a merciless grab for power.   If democracy is lost, in this frantic finger pointing and blaming groups of individuals for everyone’s woes – we are back to Ceausescu, Stalin, Hitler and other demagogues.   It is not necessary to look back as far as Stalin, Brezhnev or Andropov.  The Kremlin has not changed much at all and its premier is – in every way – aspiring to the ‘good ole days’ of his youth.

The audience at the IFFLA screening were Hindu, Muslim, Christian, Jewish, Zoroastrian and perhaps a few more religions thrown in for good measure.  Most, I imagine would consider themselves American first – because their new adopted nation had welcomed them as immigrants and given them not only a stable life for themselves and their children, but also given a philosophical direction by which to lead their lives.  I’m reminded that I too avail myself of life’s rich prospects, educationally and philosophically because I live in a free country.   I am reminded that I was interested in the US Constitution as far back as the 1980’s, and that I would not have known then how compulsively entranced I would become by Con Law and our really wonderful form of government.   I’m equally proud of so many of my friends from my teenage years, but especially Firdaus Dordi who was recently appointed a Judge of the Los Angeles Superior Court by California’s Governor Brown.  The first Parsi Zoroastrian and one of now six South Asian judges in the United States.   We spoke recently about his time in the courtroom.  He spoke of how important he thought it was that our increasingly large immigrant population would relate to someone like him on the bench and feel instinctively that justice would be fair and that they would get their ‘day in court’ – without prejudice.  It is a consistent reminder that people are equal before the law, and that immigration is just as likely, if not certainly, to be responsible for a nation’s greatness.   Yes, there are abuses, as with any system, but I doubt America’s Nobel Prize count or its huge strides in any science, mathematics, medicine, astrophysics, space travel etc. would be remarkable at all without the H1 B visa and its recipients.    Judge Dordi was at the IFFLA screening, and perhaps shares the same sentiments of universal truth and justice and collaboration that was not only the point that Zakir was trying to make, but the whole point of joining together to perform or listen to music.

When we performed PESHKAR at the Royal Festival Hall in London, the audience again was a large mix of all people.  There, under the auspices of Alchemy, at the Southbank Centre were Indians and Pakistanis sharing their deep and unbreakable bond with each other and the great tabla maestro.   They were not the least bit concerned by who might have been Hindu or who might have been Muslim.  Outside on the street their food, language, dress, customs and above all their anthropological make up was identical.  Their love of music, their love of collaboration, their love of life and their honest attempt to raise children to a better life – surpassed any other criteria.   They, along with their English compatriots, had come to witness music, enjoy communion with one another and celebrate life.    I did not see, nor do I see, at any concert that I’ve ever been to thus far, a single reason to take the politicians seriously.   Music seems to be the antidote to mad politicians.

It reminds me of my visit to Jerusalem, in 1995 to compete in the final rounds of the First Leonard Bernstein Conductors Competition.  I would walk, between rehearsals, through the ancient city marveling at its close composite of religious observances.  It was on the streets of the old city that I witnessed the Jewish mother with a child on her arm, shopping for fruit alongside the Muslim mother with a babe in hers – both discussing the merits of the best pomegranate.   Life in that short microcosm was as it should be.   I was there for Rosh Hashanah and Yom Kippur leading into the observance of Sukkot.  Perhaps naively,  I left with the feeling that at ground level there were no animosities except those driven by politicians.    A month after I came home the visionary Prime Minister Yitzhak Rabin had been shot and the region disintegrated further into distrust, intifada, and the progressive spiral downward that continues today. 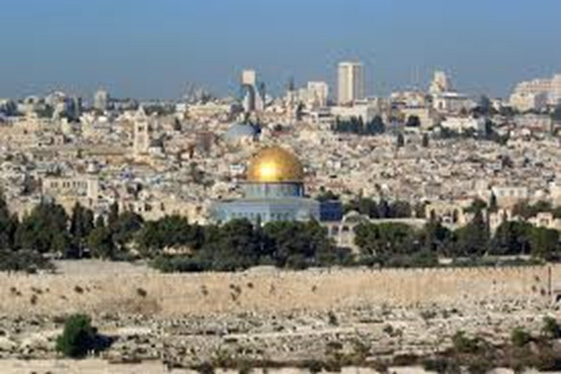 This month saw unconscionable attacks in churches over Palm Sunday in Egypt – and Norway and Sweden, hitherto not known as terrorist destinations, fell prey to civilian carnage.  And then again in Paris.   There are many reasons for terrorism in the modern world, not least of all that it is a ‘farmed commodity’ just like any other.   Economic want, distrust of local government, young men and women preyed upon by partisans gifted in the art of brainwashing, and of course money – lots of it.  Ideology has never driven man quite as obviously as currency.   But above all, the root of it is religion.   If man must subjugate his fellow man, there is no easier way than through religion.  No explanations to conscious, enquiring minds are necessary.   Only a driven fervor, roused by religious zeal coupled with mob mentality.  I am not anti-religion, having shared public discourse and spoken directly about it for many years.   Zoroastrianism teaches that each person must follow his or her own course in life – and be ‘let alone to do so’.   No man can ask another to believe in something that he does not, otherwise all religions would be one, and there would be peace on earth.   Or the atheist, a-deist point of view,- all religions would be gone, and there would be peace on earth.  Neither position seems more likely than the other.

Meanwhile, perhaps, a Tabla Concerto,  written and performed by a Muslim, conducted by a Zoroastrian or a Christian, with Jewish and Christian members of an orchestra with any number of different faiths in the audience – is the right tonic at the right time.   The Greeks were right. (Boethius) Music is the universal language of the spheres.   And as the medieval scholars believed, music is the language in which one speaks directly to God.  Sitting at dinner in Washington with Zakir Hussain,  Christi Macelaru brought up exactly this point – asking what solutions we might find to world disharmony.   It is interesting that everywhere I meet my musical colleagues, they are open vessels of humanity – and constantly looking for that elixir that will heal the wounds of division.  It’s not so easy, and as Zakirbhai pointed out – whilst people follow their comforts of lifestyle as opposed to their ideals – it will be a difficult sell.  But I’m heartened that the conversation happens as often as it does – and that we musicians can be a part of that conversation – if not lead it.   Find a concert of any music you like and go to it – not to serve your appetite but to see what communion you will find with total strangers.   It will be amazing, but not surprising  …and it will be a start!