ZANE DALAL  was born and educated in England. Awarded an Organ Scholarship to the University of Oxford, he held the position of Choirmaster and Organist at Oriel College Chapel. During his tenure the choir made several tours within the United Kingdom, notably to the cathedrals at Lichfield, Ely, Coventry and York. He holds Masters Degrees in Music from both the University of Oxford, U.K and from Indiana University, at Bloomington. 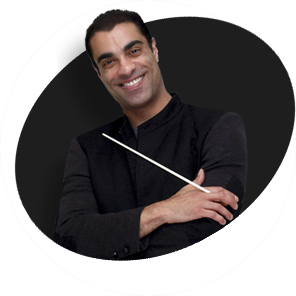 Mr. Dalal made his debut in Orchestral Conducting in the United States at Indiana University. He became one of their most distinguished conducting students, performing a wide range of new works, concerti and symphonic repertoire. In 1989, he was named the Assistant Conductor of the Opera Department and whilst at IU was extensively involved with over twenty diverse productions, including Mozart’s Magic Flute, Cosi fan tutte, Le Nozze di Figaro, Don Giovanni; Donizetti’s Don Pasquale; Puccini’s La Rondine, Madama Butterfly and Gianni Schicchi; Verdi’s Otello, John Eaton’s Cry of Clytaemnestra and a publically acclaimed performance of Humperdinck's Hänsel und Gretel. Also in that year, Mr. Dalal attended rehearsals and coachings at the Bayreuther Festspiele, under the auspices of Daniel Barenboïm and Wolfgang Wagner. He has also participated in several music festivals and competitions including the 1990 international conducting competitions in Besançon and Lugano, placing as finalists in both. He has appeared in rehearsal or performance with several orchestras including the symphonies of St. Louis, Cincinnati, Minnesota, Oklahoma City, Utah, Dallas, Kansas City, Jerusalem, L'Orchestre des Pays de La Loire, the Florida Philharmonic, the Florida Orchestra, the Symphony Orchestra of India, the Almaty Opera Orchestra and the Kazakhstan State Philharmonic Orchestra.

Mr. Dalal was on faculty at the University of Oklahoma, where he was Music Director of the Symphony Orchestra and Conductor of the University Opera Theater, from 1991 to 1993. Under his direction, the orchestra received tremendous recognition when they made their first statewide tours. In this capacity, he was selected to several fundraising committees and was a major contributor to the outreach program for the College of Fine Arts.

In January 1994 his performance of Tchaikovsky's 5th Symphony with the American Youth Symphony in Los Angeles, prompted an enthusiastic endorsement from Zubin Mehta and Daniel Barenboim.

In September of 1994 Mr. Dalal led the Utah Symphony Orchestra in a special gala concert for the Lord Mayor of London, which launched the St. Paul’s Cathedral Appeal Fund in the United States. Preceding this event, he recorded a compact disc, with the same orchestra in collaboration with the inspired engineering of the late John Mosely, that traverses both ‘pops’ and ‘classical’ repertoire, using a revolutionary recording technique that eliminated distortion. Mr. Dalal's excellent rapport on the platform and the engineering procedures, resulted in decision to record several of the works in unedited ‘single takes’ resulting in an exciting, seamless musical flow.

In 1995 Mr. Dalal competed in the prestigious 'First Leonard Bernstein Jerusalem International Conductors Competition'. From a starting field of 233 candidates, selected from international preliminary rounds held in Tanglewood, London, Vienna, Tel Aviv and Osaka, Dalal was one of 17 international finalists invited to conduct in Jerusalem.

In 1996, by nomination, he was one of nine conductors at the American Symphony Orchestra League “National Conductor’s Preview”, in Kansas City and spent that summer at the Ravinia Festival by invitation of Maestro Christoph Eschenbach. Through the 1997/1998 season Mr. Dalal was invited to assist with the Dallas Symphony acting as cover conductor for selected concerts with Andrew Litton and guest conductors. In February of 1999 he was 'shortlisted' for the assistant position with the Minnesota orchestra and in March was an active participant in the American Symphony Orchestra League workshop in Chicago.

In October 1999, following auditions for the assistant conductor position, Mr. Dalal was invited to lead the Florida Philharmonic on a two program-four concert 'outreach' tour of the South Florida region. This successful endeavor was marked with a tremendously positive response to the level of musicianship on the platform culminating at the Pompano Beach Amphitheater. Mr. Dalal was honored to accept the key to the city, presented shortly thereafter by the mayor. In 2001 Mr. Dalal conducted the Chicago Civic Orchestra in audition, by invitation of Daniel Barenboïm and conducted The Florida Orchestra during their search for a Resident Conductor.

Founded in 2006, at the National Centre Performing Arts in Mumbai, The Symphony Orchestra of India, the nation’s first professional orchestra has fast become one of South Asia's best performing ensembles. The orchestra has performed a wide range of symphonic repertoire from Bach to Britten and large scale productions ranging from grand opera to the popular show. Dalal served as the orchestra’s Resident Conductor from 2007, joining the orchestra a few months after its founding. In September 2014, Dalal was appointed Associate Music Director of the orchestra. He continues to have deep involvement with all aspects and performances of the Symphony Orchestra of India– from conducting and rehearsing the musicians to helping shape the growth of the organization.

A keen musicologist, Dalal has initiated several steps in music appreciation at the NCPA, Mumbai. He regularly delivers lectures, pre-concert talks and pens articles and programme notes for the Symphony Orchestra of India. Dalal has been committed to many educational initiatives that help bring classical music to young children including all the music performance programs initiated by the NCPA, which in time will provide for local talent to flourish at internationally recognized standards. Mr. Dalal is a dynamic part of the music management team at the NCPA and is extensively involved in helping the NCPA, Mumbai bring western music to a wider audience.

In January 2016 Dalal led the Symphony Orchestra of India on their first tour to Europe, performing in the cities of Zurich, Geneva and St. Gallen under the auspices of MIGROS KULTUR-PROZENT. The European premiere of Zakir Hussain's new tabla concerto - Peshkar, - commissioned especially for this tour and world premiered in Mumbai in September 2015 - was given in Zurich, on 19th January, 2016 with the composer as soloist. The orchestra showpieces Smetana's Bartered Bride Overture, and Bartok's Concerto for Orchestra were part of the tour repertoire. All three performances in all three locations were received with warm enthusiasm from the Swiss public and favourable notices in the press. In May, Dalal led the London premiere of Peshkar with the BBC Concert Orchestra at the Royal Festival Hall in the inaugural concert of Alchemy 2016 at the South Bank Centre.

In February 2019, the orchestra embarked on their first tour of the United Kingdom, playing in Birmingham, London, Cardiff, Guildford and Edinburgh. Dalal shared conducting duties with Martyn Brabbins, leading the orchestra on three of the six concerts – at Birmingham’s Symphony Hall on the 19th, at London’s Cadogan Hall on the 20th, and Guildford’s G-Live on the 22nd. The orchestra was well received with favorable notices in major publications, a small portion of which appear here below.

"Conducting here was ...subtle and stylish, Dalal carefully teasing at the shifts in tempi and pulling out the nuances of the work. In a performance which could rival some of Europe’s major orchestras, the SOI wove a vivid tapestry evocative of Scheherazade’s tales, with soaring woodwind, punchy brass and warm strings. This is clearly an orchestra that’s going places."
- Miranda Hegge – The Arts Desk.

"...this is a serious outfit with a rich, grainy sound and some striking individual players. Under its director, British-born conductor Zane Dalal, the orchestra launched with a performance of Berlioz’s Roman Carnival Overture that whirled along at a startling pace.
"...the performance of Rimsky-Korsakov’s Scheherazade was a full blooded and stirring rendition."
- Ivan Hewett – The Daily Telegraph ★★★★ Four Star Review

Dalal opened with a fizzing performance of Berlioz’s Roman Carnival Overture, and an even more searching examination in Rimsky-Korsakov’s Scheherazade. There was no doubting Dalal’s ability to use it all to maximum effect."
- Andrew Clements – The Guardian