Warning: Use of undefined constant core_mods - assumed 'core_mods' (this will throw an Error in a future version of PHP) in /nfs/c11/h01/mnt/203766/domains/zanedalal.com/html/blog/wp-content/themes/zanedalal/functions.php on line 7
 MUSE, PROSE AND CONS! DECEMBER EDITION - Zane Dalal Blog

I came to know the work of Maestro Herbert von Karajan in the 1980’s when I was first finding my way as a musician, and long before I had decided I might follow his profession.   I – along with many in my generation – worshipped at his altar, marveling on his achievement and the storied sound of the Berlin Philharmonic.   Later, as I became less naïve, I came to know of his autocratic ways, his despotic control over both the Vienna and Berlin orchestras, his swaggering moniker as ‘Music Director of Europe’ and his sway over the recording industry especially Deutsche Grammophon.    Later still, I came to know of his much denied, much downplayed connections with the Third Reich.  His two id numbers as a twice enrolled card-carrying member of the NSDAP and the fact that he had joined as early as 1933, quite rightly proving that his participation was not a mere ancillary to his conducting posts, but that his thought processes were aligned with the party leadership two years before Aachen or Ulm.  He was well on his way to fashioning a career in the Reich by 1942.   Later, in some interviews, even as late as the year of his death in 1989, this strangely entitled, despotic quality, whether intrinsic or learned, was clearly visible.   Below, the environment in which he thrived.

Hitler’s Birthday Concert in 1942 at the Berlin Philharmonic. 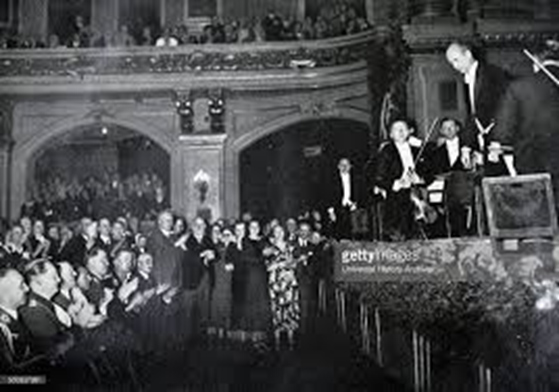 Furtwängler –Karajan’s predecessor – greets Hitler, Goering and Himmler and others in the High Command.

Similarly, the soprano Elisabeth Schwarzkopf is one of the greatest singers of any generation.  Even though my first introduction to her was through Guilini’s incomparable recording of Verdi’s Requiem with the Philharmonia Orchestra, alongside Christa Ludwig, Nicolai Gedda and Nicolai Ghiarov, it was obvious without much more searching on my part, that she was one of the finest sopranos ever to sing Mozart, Richard Strauss or Wagner.   Funny that her Prussian/ Polish heritage at birth might have gone terribly against her had she been Jewish.   Despite the stand taken by her father, she was a member of the Nazi party – with no illusions that it had anything to do with anything but furthering her career.   I will be the first to admit that only those who lived through it can speak to what they would have done.  Human judgment – one to another – doesn’t serve any purpose, and belongs to a higher power.  It’s just an observation.  Many did take a stand, and many did suffer, and many did remove themselves from association.  So, to brush it under the rug would be unfair to all those with the dignity and backbone to stand up and be counted, in the face of evil.   Elisabeth Schwarzkopf’s flaws in this regard are not present in her divine music making and there can be no detraction of her musical contribution.  To suggest that collusion with an evil régime made her music in some way deficient is to suggest that the greatness of her music could have assuaged the evil around her.  It did not.  It does not.

I had the great pleasure of meeting James Levine in 1989 in Bayreuth, while he led perhaps the most sumptuously luxuriant Parsifal I have ever heard.   It was almost too beautiful.   I remember when he took over from an indisposed Karajan on the Berlin Philharmonic tour to the US in 1985.   From the late 1970’s he had established himself as one of the best operatic conductors who has ever lived.  His pacing and his understanding of these scores was unimaginably true, and even if you hadn’t quite interpreted an opera in his way, you were convinced of his logic almost as soon as you heard it.   He developed the Metropolitan Opera Orchestra into an ensemble that all the real musicians and cognoscenti knew indubitably as the finest orchestra in the United States.   I remember one of his first Ring Cycles with the Met in the 1980’s.   I was sitting in earshot of Margaret Harshaw, outside her studio at Indiana University, and remember when discussing it with her, that she heaped praise on not only the sumptuous sound, but the drive of the drama.   He had in a single performance delivered what was lacking one from another in the performances of Karajan and Böhm.   Here we are discussing the merits of Richard Wagner, and his extraordinary music.   What about that awful legacy?   It doesn’t dispute his merits as a composer?   Separating the art from the artist in this case has been very difficult, not because it cannot and should not be done, but because Wagner’s music was played at death camps during the Holocaust and is in the living memory of survivors ever associated with ultimate evil and the loss of their loved ones.   It’s not imagined.  Read on.

It might not be enough in the confines of this article to comment on the unholy connections of the Wagner family and Hitler’s Germany.  Actually, Siegfried Wagner, the composer’s son and his odious wife, the Englishwoman Winnifred Williams were personal friends of Hitler, and Williams had visited him in jail providing him the paper on which he wrote Mein Kampf.

His children, the composer’s grandchildren were ‘brown shirts’ and inextricably linked to the process, the idea and the régime.  They say a picture is worth a thousand words.  Here are two. 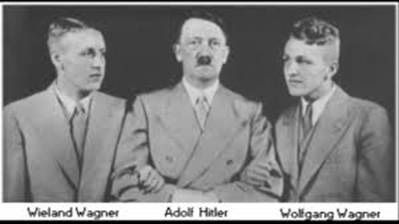 The Wagner boys referred to him as Uncle Wolf.

The Führer with his good and close friend Winnifred Wagner, (née Williams)

We knew then, I suppose, what many familiar with backstage workings of opera houses have always known, that emotions and drama and large groups of chorus members in makeup and various stages of undress make for lustful advances and the seeds of many a consenting tryst.   Now, in his dotage, men have come forward to accuse Levine, quite rightly, of offensive and inappropriate behavior when they were much younger.  Now, in his dotage, suffering from Parkinson’s, having enjoyed an unparalleled run of zenith performances that have brought them unparalleled fortune, the MET has suspended him.   The flaws of the man are not in dispute, but the amazing music he made and the contribution to the profession of opera is equally indisputable.

As I began this blog, I alluded to the fact that many commentators suggest that you cannot separate the artist from the art.   That somehow a deeply flawed human being suggests that his or her art cannot be celebrated.   To suggest this is a supreme irony.   How can something that was glorious and brilliant one second, be suddenly inglorious because of unrelated human errors.    Let me explain.   Art, in my view, is not created by the great and glorious artist.   Great music is not performed by great and glorious men and women.   We sometimes have keys and can unlock the door to a divine world where art resides, untouched, unencumbered by mortal understandings.   If we have managed to be keepers of the keys – it is some providence that allows us this privilege, but it is not because we are some great humans worthy of preferment over their fellows.  Yes, there is a lot of hard work, usually trying to make sense of the gift, but If there is any artist or musician who thinks that their gift is an entitlement of their own creation…please consider giving up these keys to heaven and do something less….well, less!
In my view, what we do is nothing short of priesthood, which brings me to the other example.

One of the scandals that recently rocked the Roman Catholic church, perhaps in part accelerating the resignation of Papa Benedetto from the See of St. Peter, was the video of a priest returning home with his fellow revelers from a gay night club and then at 6.00 am setting up an altar, vesting himself and saying Mass, dutifully, with no thought to the surrounding environment.   Let us for a moment set aside the prospect that if Jesus was transubstantiated during that Mass, as it is certain that he was, that he would have been happier tending to ‘so-called’ sinners than tending to some pliantly pious people in a purple palace.  It is precisely because of ‘sacramental hands’ from the moment of that priest’s ordination that the Mass remains unaffected, as pure, as valid, as divine, as solid as ever.   The action is separated from the person, neatly and completely separating the ability to unlock the divine with the human insufficiency of the person doing the unlocking.    This is the most consequential sacrament that prevents Mass being scandalized all over the world every day, because it is somehow linked to the human condition of the poor wretched unworthy who deigns to handle corpus Christi. 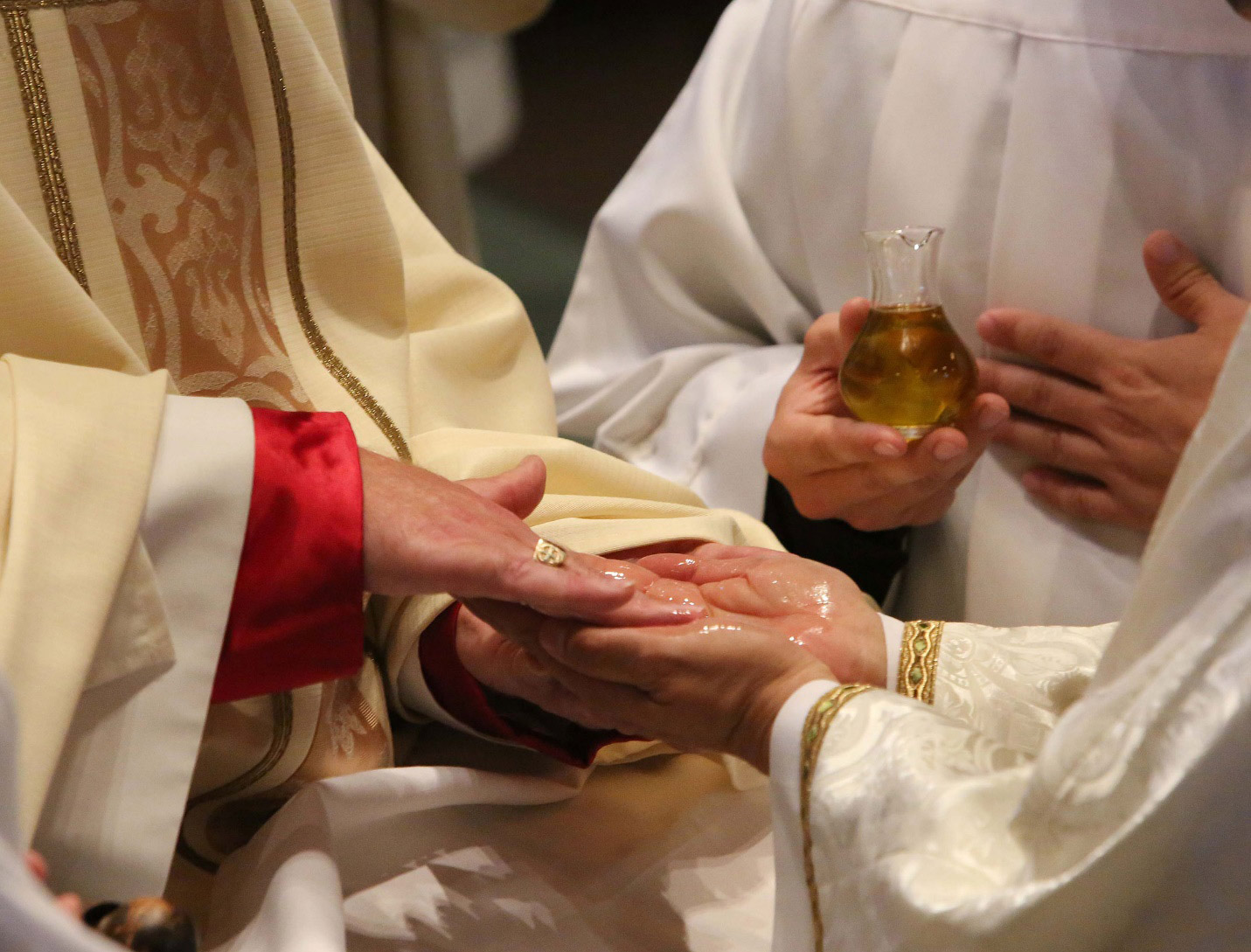 The anointing of the hands.   In this age-old ritual during Priestly Ordination, these hands that will receive Christ every time that Mass is celebrated will be able to do so, separate from the human frailty and flaws of the priest.

Can you imagine, if the priest had to be in a permanent state of divine grace to celebrate Mass.  The wheels of worship would grind to a halt.   It is clearly not the intention.   By the same token, it is not up to vainglorious prelates to deny communion to any persons depending upon flawed, human understandings, proclaimed dogma, or worse still…politics.   Either Christ is necessary for redemption or He is not.   Who on earth …literally…has the gall to decide that?

So it is with music, and filmmaking and photography and art and all the great influences of the divine that we are privileged to unlock if we are practitioners.   In the current spate of aggrieved persons coming forward to ask for redress for sexual assault, harassment or any other offense that diminishes the equality and dignity of all persons, there is no need for confusion on this issue.  To hold the art linked to the artist is flawed logic by any stretch.   To presuppose that there was something wrong with the art of a bad man would be to presuppose that bad art is the province of bad people, and …equally laughable …that good art is the province of good people.

The most important part of my message is this.  First, I answer my question posed at the beginning of this piece, “Can, Should and Must art be separated from the artist?”.   Yes, unequivocally, yes!    It is precisely this logic that allows us to revere and enjoy the artistry and contribution and at the same time, allow the reprimand, in the strongest terms, of the human being.   Having a great career – or other public stature – doesn’t excuse you from being a perfectly rotten human being or a tragically flawed one.   And your artistic contributions in your chosen profession, if you have had the privilege of unlocking the divine, are not entirely yours, so are not diminished by your human errors, nor therefore do they save you from answering for them.

Leave a Reply to Rita Rahimtoola