This month marks the founding of the Symphony Orchestra of India exactly ten years ago in 2006. It has been my great privilege to help chart the course of this fledgling organization, for almost the entire decade, and I cannot help but share some of my personal perspectives in this August edition of my blog. This text also appears as an article for NCPA’s ON STAGE Magazine.

It was December 2006, and we were sitting at the dinner table in Los Angeles with my aunt Franey and my late uncle Nariman Irani. My uncle was a childhood friend of our venerable NCPA chairman, Mr. Khushroo N. Suntook and he had just been in Bombay and happened to be on his way out and picked up a newspaper at the airport. The article outlined the forming of the Symphony Orchestra of India (SOI), newly minted in August 2006. It must have been a good stash of information, because he spoke in glowing terms of the new orchestra and its directors. I must admit I was unmoved. I had spent my whole life in either England or the United States. My musical successes had been with Western orchestras, and the idea that I might go to Bombay for orchestral music was a bizarrely foreign idea to me. After all, the last Parsi conductor to deal between Los Angeles and Bombay had being going the other way. No. It seemed a ludicrous thing to contemplate.

Then my uncle said something that I will never forget. “I know what you’re thinking, and you’re right to think it, but this outfit is, I’m certain, going to be different. You see, I know Khushroo, and I know his passion and knowledge in classical music, and he won’t be doing anything sub-standard.” There followed a tit-for-tat bargaining in which I consented to come to Bombay on a holiday for 15 days, in February 2007, at which time I could find out for myself ‘what was what’. I wanted to accomplish two things. I wanted to conduct the orchestra in rehearsal, and I wanted to meet, if possible, with then Vice-Chairman, Khushroo Suntook. Looking back on things from my current vantage point, it was very nice of Marat to extend the possibility to conduct the orchestra, and request that Johannes Wildner give up 20 minutes of his rehearsal on Tchaikovsky 5th Symphony. There must have been a mutual thumbs-up from the players and from me, because I instantly knew that there was nothing substandard about the orchestra, nor the mission or the ideals that lay ahead of us. The meeting with Khushroo that followed was not only extremely affable, but proved to me that a lasting relationship was not only possible, but very likely. A meeting that followed with Marat was equally positive, but I knew that the elements of trust and work lay on my shoulders in the initial days. I relocated to Bombay in May, a short three months later. That February trip was much cause for celebration, as I look back, and in large part because I got to meet and shake the hand of Dr. Jamshed Bhabha, the Founder and chief benefactor of the National Centre for the Performing Arts, Mumbai. This provided me with an extraordinary link to our past, and a constant reminder of the deep debt of gratitude we all owe to him for our future. The rest, as they say, is history.

In all the things that I remark upon here, our Music Director, Marat Bisengaliev has shared the same road, through ups and downs, through triumphs and despairs, through thick and thin, and yes, with a level of passion for the job and duty and loyalty to the organisation that has been a testament of his character. He, too, made it possible for me to make my way in the organisation. I’m grateful for the friendship we have. 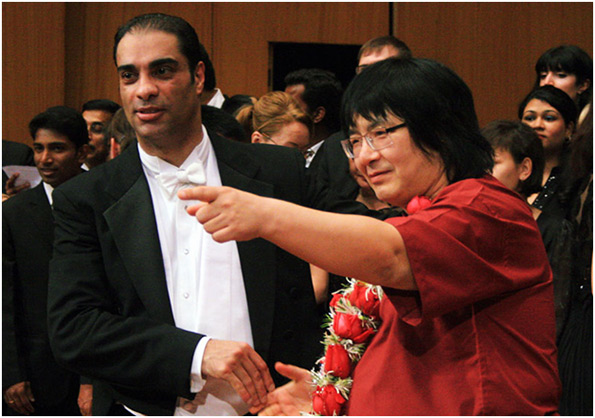 After almost ten years at the SOI, I personally can look back with some pride and pleasure. Not only to speak a little of our journey and my perspectives on it, but to mention my personal gratitude to certain persons, without whom it is difficult to imagine our current position. That is not to say all things were rosy. As much as I had my doubts sitting in Los Angeles, in 2006, I was to come to know that the formation of the SOI had many detractors and naysayers in Bombay. The task of making things work despite the barrage of negative impulses is something that has made the successes that much sweeter. If there are any detractors still left, they would surely be tinged by a little embarrassment. Yes, it was a vision, and as visions tend to be, often beyond the capacity of some to grasp. We are grateful for the perseverance through all odds of our chairman. No one would have predicted with such surety in 2006 that the global economies would plummet into a historic recession.

This factor, along with unforgivably intransigent behaviour of some ‘players’ in the execution of Dr. Bhabha’s intentions, forced us to plough on in ever muddier fields, but always with the hope of a healthy harvest. It is one of the great unsung sagas of the NCPA that through these lean years, the SOI not only flourished, but went on tour, received international recognition, co-performed and produced grand operas and grew a roster of fine international soloists and conductors. No one can really imagine the silent and ominous back story to all this achievement. You will have to sit directly in front of those in NCPA leadership, who persevered, and ask, ‘whilst the music played on’, how they ‘kept the lights on’.

Tours are tricky business. You have to be good enough to be invited. You have to maintain a strong rapport with your hosting impresarios, whatever that might entail. Then you really have to show your chops when you perform, and everything must work like a Swiss watch. When we went to Moscow, and reassembled the orchestra in Russia, just days before the performance of Beethoven’s Ninth, with a new Russian choir and a plethora of administrative unknowns, we not only had to be completely battened down and professional, but we had to give the demeanour that we had done this sort of thing several times before. By the time, we had toured to Oman, Abu Dhabi and Switzerland, it seemed that touring was an inevitable part of the orchestra’s life. But it wasn’t always that way. Yes, the NCPA pulled it out of a hat, due to diligence not only from our leadership, but from the tireless work in administrative offices on visas, airfares, fee structures and itineraries. Work that continues unabated every season, every month. There are many ‘ladies of the office’ who know who they are, without whom our efforts would look very different.

By 2008 we had embarked on a full-scale opera, Madama Butterfly. Our orchestra held sway valiantly in its first foray into operatic pit work. We did so well that I think it was almost natural that opera would become a great part of our work, even if Khushroo Suntook wasn’t the opera fanatic that he is. We (Fali Unvala) had built an extraordinary set. The bridge for the entrance of Butterfly to her new home was a masterpiece that could have spanned any real garden stream and might still be standing centuries later. We had built the real thing, not a prop. I remember the blocking rehearsals and training the orchestra while singing all the parts and helping work out problems with stage direction and stage management, and lighting, and all the numerous bits and pieces that make opera daunting and crushing as well as rewarding and fascinating. By the time we did the Cavalleria Rusticana-Pagliacci double-bill in 2012, it seemed that we were old hands at it.

Our international footprint is a presence on the world stage that has been carefully forged near singlehandedly by Khushroo. It is perhaps the most important process at the NCPA. We have gone from a local space of darkened theatres to an internationally recognised campus of artistic life, in multiple genres, in a very short space of time with over 500 performances a year. This doesn’t come by accident or by luck. It comes by hard and diligent work. Whether AAPRO or forging ties with the NCPA Beijing, or AAPAC or IAMA, or countless trips to London and Europe to expose the grand work of the NCPA – the end result is a complex and vibrant quilt woven by a single man. The benefits of these established ties will continue to be apparent for years to come. In addition, there is much to be said about reorganisation and restructuring. Though the proper establishment of separate genres and their governance at the NCPA is not part of the SOI story, it is certainly part of the superior artistic environment in which the SOI thrives. The idea that the NCPA is a producing house on its own merits, garnering not only the trust and partnerships of great musicians and institutions internationally, but able to send Indian musicians, dancers, actors and now its own orchestra to represent the nation, is a huge achievement. It is the achievement of the last ten years, and it is without contestation, the achievement of one man and his vision. 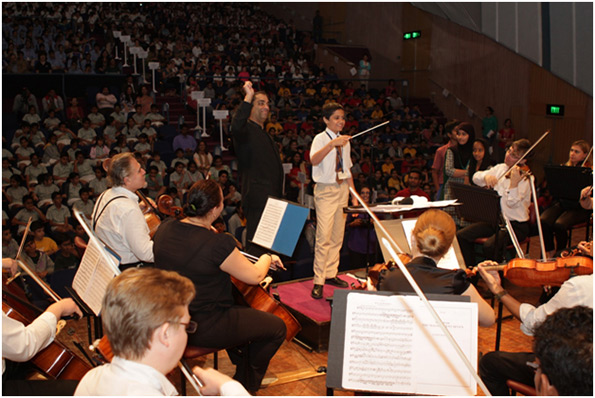 The legacy of our educational initiatives that are leaping forward in the training of young Indian musicians who aspire to a fine performing standard is equally important. Marat has spearheaded almost every educational idea that we have, convinced and convincing all around him, that without attention to this future focus, what we were doing would be incomplete and short-lived. Making educational initiatives work in India is a gargantuan task without sensible rules that one can navigate. Everyone involved knows it. Suffice it to say, that for the most part, our efforts and the great merit to the lives of children have overshadowed the obstacles we have encountered. A work in progress, this foundation for the future is a joy to be a part of – and when I’m evaluating students that I haven’t seen in six months, I’m so delighted and heartened by their progress and beaming faces. 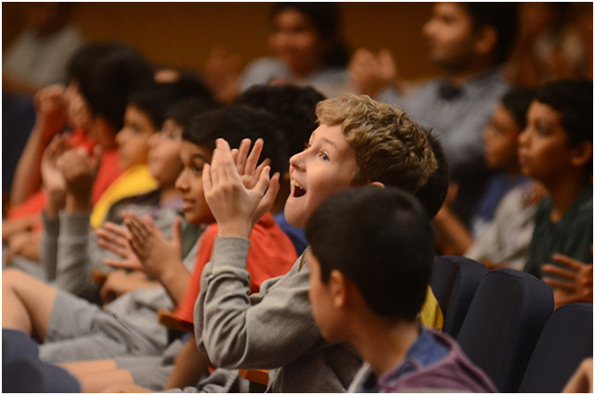 I recount all these things with pleasure and pride, because I have had the duty and privilege of contributing personally to all these great undertakings at the SOI, over the last ten years. I’m convinced that we are on a trajectory of high importance, not only for the lives of Mumbaikers but also for the whole of India.