This month I was asked to write a short piece for the Law College in Mumbai. My remit was to find a link between the Law and Music. I have always held that human endeavor is as great as it is shared, and so I was convinced that the links between these two great fields not only existed but were strong. I submit a version of the article for this edition of my blog. I hope you will enjoy it.

Finding the real convergence between Law and Music, – at first glance, might prove to be almost impossible, but quite by chance it is a subject that has interested me to quite some extent. I developed a fascination for Law, through my reading on Con law – in particular as it pertains to the United States Constitution. My reading inevitably took me not only through the original document, its 27 amendments and several books written on its authoring and history, but more importantly on its interpretation particularly through the opinions and dissents of the United States Supreme Court. Concurrent to that area of interest, I started comparing the judicial processes in other countries. Whether looking at the recent shift from the Law Lords of the Upper House now reassembled as the Supreme Court of the United Kingdom, the French judge tribunal system, or even the Supreme Court of India, the maxims are the same. How to constitutionally elevate society to operate under a just set of principles under law. Because there is some naturally shifting focus as democracies flourish – there must be naturally shifting focus in the law that governs them. That is not to say that textual rigours don’t matter. But language itself is a creative reliquary and sometimes deliberately allows for fluid interpretation. This requires creative intent – and now a comparison with music becomes all the more plausible.

On a shallow level, the presence of law, lawyers and judges in music, might be just confined to operatic plots, in which lawyers generally get a raw deal. They show up as notaries, or legal representatives at public occasions. More often than not, they are associated with prisons, judgements of execution and tribunals which, of course, make for the best kind of drama. From Tosca, Fidelio, Don Carlos, Aida, Chenier, Billy Budd and countless other plots, there are people sentenced to die, and invariably members of some legal system or the other, presiding over their demise. However, this doesn’t really speak to the law itself – which is also available to opera lovers within certain plots. 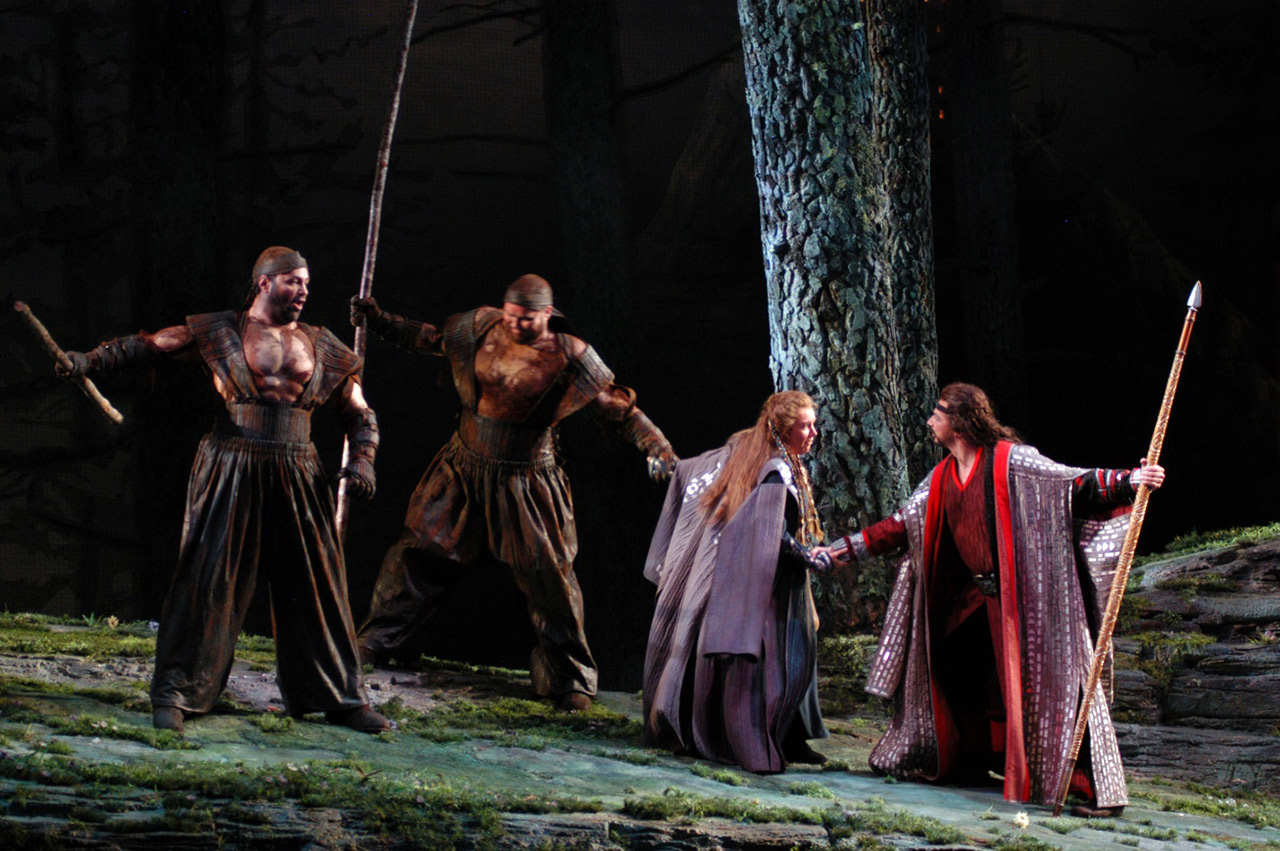 Der Ring des Nibelungen, the epic tetralogy by Richard Wagner, is built on a series of legal principles, which are not always front and center. The theft of the Rheingold by the dwarf Alberich, doesn’t just happen in a vacuum. There is criminal intent, prejudicial bias and a certain degree of entrapment. The entire plot of the first opera hinges on a breach of contract. Wotan does not pay the giants in full for building Valhalla, reneging on the deal, eventually giving up The Ring to save the goddess Freia, who was promised to the giants in the first place. It is an almost primitive lesson in the great legal maxim pacta sunt servanda. Whether punished for disobedience in Walküre, or being part of a potion inspired love triangle gone wrong in Götterdämmerung, Brunnhilde, goes through her own set of ‘legal’ problems.

A more jovial link to the law is present in the Gilbert and Sullivan operetta, Pirates of Penzance. Frederic, the hero is indentured in servitude until his 21st birthday, to a band of pirates. On reaching his 21st birthday, he is informed that he was born on the 29th February, and therefore must serve at least a further 63 years before he can be released from his legal bond. Considering that his ‘hard of hearing’ nanny was supposed to leave him in the care of ‘pilots’ and not ‘pirates’, should the sound judgement be originalist, textualist or driven by intent and purpose of justice. The opera draws to a close, with all the pirates becoming peers of the realm, and a grand salute to Queen Victoria. However, these moments in opera only have an incidental relevance. Either way, I highly recommend Justice Ruth Bader Ginsburg’s new book, “My Own Words” – in which she devotes one chapter for her love of all things operatic. I took some of my cues from her.

The real connection between Law and Music is in our approach to the two disciplines. If one sees the law and jurisprudence as a mathematical code book where equations provide solutions which must be balanced to be integral, then music will provide an identical mirror image. The precepts of mathematical precision govern the principles of music making on a basic level. Those same precepts might govern the law on a basic level. But to examine these two in the framework of right and wrong – black and white – would be to miss the boat completely. The Law and Music both demand large swaths of gray if they are to be experienced in their beautiful and nuanced complexity.

Therefore, both disciplines allow for a human, creative process – and this is where things become truly interesting. The Law is a series of codices, handed down over time, in several promulgations, amended, corrected and finalized. This finalized text is the initial point of reference and the last point of reference. However, in deliberation, a judge – especially one charged with Constitutional matters – might take a circuitous journey. He/She might see the relevance of the law springing from the context of the current case. He might review and remember the law in the context of his own understanding, and recognize that his own understanding may have changed over time. He might take his life’s experience into the mix, to judge to what extent he will be cognizant of the multiple ‘amicus curie’ briefs set before him. He might discuss the matter with close professional friends whom he respects. In the case of judges sitting en banc, the time spent at conference can be a crucial one, where each is allowed to gently sway the other by persuasive and creative first drafts. It is said that the most important number in a 9 judge panel is the number 5. Though it is always gratifying to be part of a unanimous decision, one only need have 5 to win the case. Careful persuasion of even one incalcitrant justice, might sway the decision. Then, after all considerations, the judge must return to his initial point of reference – the letter of the law.

Similarly, a well-crafted dissent may be suddenly found years later, by a law clerk who is trying to make a point, and this old dissent now bears the majority consensus because times and societies are changed. These dissents, above all, must be gloriously and powerfully written, to express their point across the generations, with compelling eloquence. A dissenting judge must never consider his work secondary or meaningless in the face of a contrary decision adopted by the court. He is in fact expressing the scope of the law, whereas the prevailing decision might be deliberately tightly construed to pass muster.

It might surprise people to know that a conductor’s processes are almost identical. It could be because I personally have thought of things in this way, but the reasoning is unassailable. A conductor, exactly like the judge, starts with the law, the codices of language which cannot be changed and are handed down to him by the composer, after corrections, amendments and finalization. The score is a reliquary of a special kind of language which is beauteous and nuanced if it is explored in layers of gray. The score is also the initial point of reference and the last point of reference.

Just as the judge pores over the law for its intent, its meaning and its current relevance – the conductor must find the intent and meaning of a piece, in preparation for a performance. His journey must be as circuitous as the judicial one. He must remember his own connections to the piece and find current relevance. He must be cognizant of the fact that his opinions of various passages of music might have changed since he first contemplated the work. He must be open to the professional input of the great musicians in front of him during rehearsal, so that the piece finds its strength because the players before him have found their strength in an organic way. Similarly, a judge relies on the strength of his judgement because great lawyers have led him to that strength.

Music, just like the law, must be written in a convincing way to make its mark. A work might suffer in obscurity, like the lost dissent. But it would remain lost if the language doesn’t jump off the page when it is rediscovered. A conductor is as linguistically adept as a judge must be. He must find the meaning of the language and provide the intent of the phrase, with the surety of law. The parallels are stunningly similar. Amicus curie moments are less obvious for conductors, but all musicians hear their peers perform. Every time a performance is realized anew, it can be considered a brief from ‘a friend of the conductor’. Our amicus briefs reach out in the performances of other musicians as if to say “did you consider this?”

There are a number of direct links to legal matters for musicians. Some are old and well known, including the idea of incorporating as Arts Organizations, and how to manage orchestral personnel – not as corporate workers, but as creative agents. But whether on tour, or recording, or presenting themselves in concert, there is one large and looming legal matter that is yet as vexing as it remains unsolved. By far the most complicated is the area of copyright and intellectual property. This field has grown exponentially in the modern era, especially as it pertains to recording, instant electronic dissemination on the internet, and use and reuse of what may be falsely considered public property, but is in fact privately held intellectual property. For example, if a person takes a ‘selfie’ with the Taj Mahal in the background, that is fair game. The iconic landmark is a world heritage site, the ‘selfie’ belongs to the person who took the picture. Now, if someone goes to a concert and records a portion or all of the performance, that music does not belong to the person who did the recording. It belongs as intellectual property, first to the musicians who create it, and then to the arts organization to whom the musicians by contract have legally assigned additional exclusive rights. The complication compounds when the phone recording is then posted on the internet, making the pirated recording available to millions without the permission of those who own it. In this and many other areas regarding the internet, the law in most countries is still being written. We have yet to find the legal solutions, because we have yet to face the legal questions. It will be a fascinating area of enquiry and perhaps the most problematic in the next twenty years.